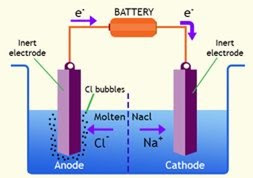 Ionic Theory
To account for the phenomena of electrolysis the Ionic Theory was put forward by Arrhenius in 1880. The theory states that electrolytes are made up of ions, which are built up in certain patterns called crystal lattice. When these substances dissolve in water, the structure is destroyed and the ions are set free to move.Concentrated mineral acids such as sulphuric acid, hydrochloric acid and nitric acid do not contain ions but they consist of molecules. However, when they are diluted, the molecular structure is destroyed and ions are formed.
Electrolytes and Non-electrolytes
Distinguish electrolytes from non-electrolytes
The main purpose of this chapter is to investigate the effects which electricity has on a range of substances, and to develop a thorough explanation of those effects in terms of our present knowledge of atomic structure. Before we begin, it is important that we familiarize ourselves with different terms that we are going to use to explain different phenomena. It is crucial that the definitions and meanings of these terms be understood at the outset in order that concepts defined in this chapter are easily and clearly apprehended. These terms are given hereunder:
Electrolytes and non-electrolytes
Liquids such as ethanol, paraffin, petrol and methylbenzene do not conduct electricity. The bonding in these compounds is covalent. These substances consist of molecules. There are no free electronsor charged particles to flow through them. Solutions of covalent compounds, for example sugar solution, do not conduct electricity.
These compounds are non-electrolytes. Non-electolytes exist only in the form of molecules and are incapable of ionization.
Ionic compounds contain charged particles (ions), but in solid state, the ions are firmly held in place and they are not free to move. An ionic solid does not conduct electricity. However, the ions present can become free to move if the solid is melted or dissolved in water. Then they can conduct electricity. For example, solid sodium chloride cannot conduct electricity but when melted or dissolved in water, the ions, Na+ and Cl– are set free. Then these ions are free to move in solution and hence conduct electricity. These compounds are called electrolytes.
Weak and Strong Electrolytes
Categorize weak and strong electrolytes
Weak electrolytes are compounds that are only partially or slightly ionized in aqueous solutions. Some substances, for example, ethanoic acid solution ionize partially.
CH3COOH(aq) ⇔CH3COO–(aq) + H+(aq)
Most of the electrolytes exist in solution in the form of unionized molecules. For example, in ordinary dilute (2M) ethanoic acid, out of every 1000 molecules present, only 4 are ionized and 996 are unionized.
A solution of ammonia water is also a weak electrolyte, containing a relatively small proportion of ammonium and hydroxyl ions.
NH4OH(aq) ⇔NH4+(aq) + OH–(aq)
Most of the organic acids are weak electrolytes, e.g. tartaric, citric and carbonic acids.
However, there is no sharp dividing line between weak and strong electrolytes.Water is also a weak electrolyte. It ionizes only slightly.
H2O(l)⇔H+(aq) + OH–(aq)
Study shows that for every molecule of water ionized, there are 6 million molecules of water not ionized.Strong electrolytes are compounds that are completely ionized in aqueous solutions. When sodium chloride is dissolved in adequate water it ionizes completely into Na+ and Cl– ions. There are no NaCl solid particles left unionized. All strong electrolytes (salts, the mineral acids and caustic alkalis) ionize completely in solutions.
The Mechanisms of Electrolysis
Electrolytic Cells of Different Electrolytes in the Molten and Aqueous States
Set up electrolytic cells of different electrolytes in the molten and aqueous states
The conductivity of ionic compounds is explained by the fact that ions move in a particular direction in an electric field. This can be shown in experiments with coloured salts. For example, copper (II) chromate (VI) (CuCrO4) dissolves in water to give a green solution. This solution is placed in a U-tube. A colourless solution of dilute hydrochloric acid (HCl) is then layered on top of the salt solution in each arm. Graphite rods are fitted as shown in figure 13.3. These rods (electrodes) carry the current into and out of the solution.
After passing the current for a short time, the solution around the cathode becomes blue. Around the anode, the solution becomes yellow. These colours are produced by the movement (migration) of the ions in the salt. The positive copper ions (Cu2+) are blue in solution. They are attracted to the cathode (negative electrode). The negative chromate ions (CrO42-) are yellow in solution. They are attracted to the anode (the positive electrode). The use of coloured ions in solution has shown the direction that positive and negative ions move in an electric field. Always positive ions (cations) move to the cathode and negative ions (anions) move to the anode. 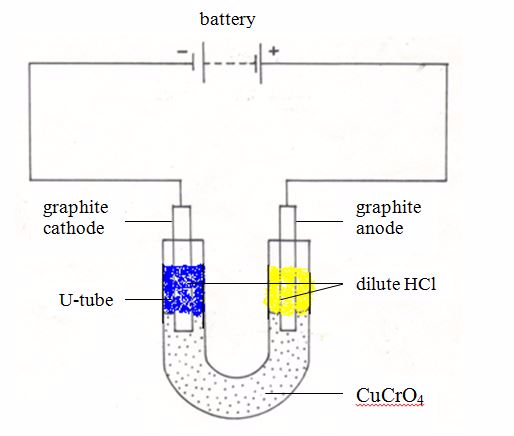 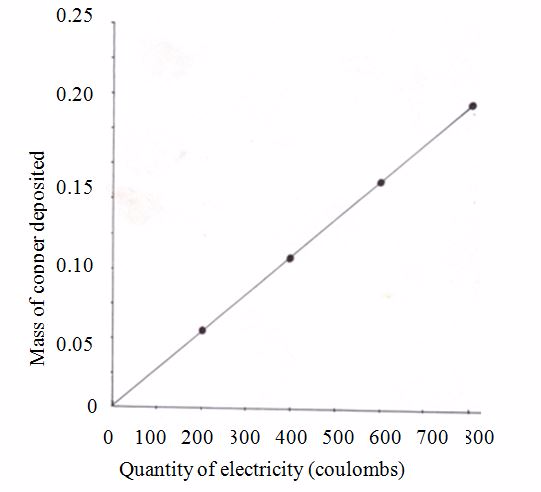 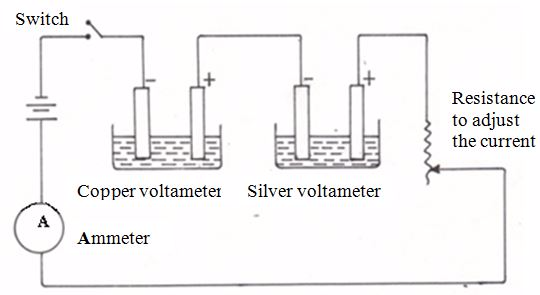 Apparatus for confirmation of Faraday’s Second Law
The experiment is conducted using two voltameters. The two voltameters are connected in series as shown. The first one is a copper voltameter and the second is a silver voltameter.The copper voltameter has copper electrodes in a solution of copper (II) sulphate. Hence, in this voltameter, copper ions are discharged and deposited at the cathode.
The silver voltammeter has silver electrodes in a solution of silver nitrate. The discharged silver ions are deposited at the cathode.
Before the experiment is started, each cathode electrode in the voltameters is cleaned, dried and weighed. The electrodes are then connected to the circuit, after which a suitable current is passed for a measured period of time.
After this, the cathode are removed from the voltameters, cleaned, dried and reweighed. The increase in mass of the two cathode electrodes represents the respective amounts of copper and silver deposited at the cathodes. The quantity of electricity required to deposit one mole of each element is calculated using Faraday’s Second Law of Electrolysis.
Specimen results
The results show that the masses of silver and copper deposited are different. A comparison of the amounts of each of the elements deposited can be made simple by calculating the number of moles of atoms of each of the element deposited.
Thus:
Amount of copper deposited = 0.221/63.5mole = 0.0035 mole
Amount of silver deposited = 0.755/107.8mole = 0.0070 mole
It is seen that twice as many atoms of silver are deposited as atoms of copper. The difference in amount of each element deposited arises from the difference in charges on ions of the element concerned.
The change on the copper ion is twice that on the silver ionand therefore twice the quantity of electricity will be required to liberate one mole of copper as for the liberation of one mole of silver.
This relationship is in accordance to Faraday’s Second Law of Electrolysis, which describes the relationship between the amount of element deposited and the charge on the ions of that element. Faraday’s Second Law of Electrolysis states that when the same quantity of electricity is passed through solutions of different electrolytes the relative numbers of moles of the elements deposited are inversely proportional to the charges on the ions of each of the elements respectively.
In order to discharge one mole of monovalent ions such as hydrogen ion, Sodium ion, Silver ion and Chlorine ion,96500 C of electricity are required. This quantity of electricity has been experimentally determined and is known as the Faraday constant.
It represents one mole of electrons, which is the same as the quantity of electrons required to discharge one mole of Siliverions to give one mole of silver atom. The validity of Faraday’s Second Law of Electrolysis is evident from the following observations:
Relationship between the Chemical Equivalents of Elements and Quantity of Electricity Passed
Relate the chemical equivalents of elements and quantity of electricity passed
A steady current of 4 amperes is passed through aqueous copper (II) sulphate solution for 1800 seconds using platinum electrodes. Calculate:
Given:
Solution
<!–[endif]–>Cathode reaction: Cu2+ + 2e– → Cu(s)
In this case, 2 Faradays of electricity are required to deposit one mole of copper atom 63.5g.
This means 2 × 96500 C liberates 63.5g of copper.
Quantity of electricity passed = I×t = 4×1800C. So, if 2×96500 C liberates 63.5g, thenI×t = 4×1800Cwill liberate2.4g of copper.
Therefore, mass of copper deposited = 2.4g
Anode reaction: 4OH–→2H2O(l) + O2(g) + 4e–
The reaction shows that 4 moles of electrons (4 Faradays) are lost during the reaction process.
Therefore, 4 × 96500 C are needed to liberate one mole (32g) of oxygen.
<!–[endif]–>Quantity of electricity flowing = 4 × 1800 C

Therefore, mass of oxygen liberated = 0.6g
Application of Electrolysis
Electrolysis has several uses in industry. Its main application has been in the fields of manufacture of chemicals and in the purification of metals for which other purification methods prove either too difficult or highly expensive to apply. Some applications of electrolysis are as discussed below:
The Industrial Purification of Copper by Electrolysis
Outline the industrial purification of copper by electrolysis
Some metals can be purified by means of electrolysis. This process is used in industry to purify copper, which must be very pure 99.9% for electrical wiring. Copper made by roasting the sulphide ore is about 99.5% pure (so it has an impurity level of 0.5%). This level of impurity cuts down electrical conductivity significantly.
This is how the electrolytic purification (refining) process is carried out:The anode is made of a large block of impure copper. The cathode is a thin sheet of pure copper. The electrolyte is copper (II) sulphate solution.During the refining process, the copper atoms of the impure block become ions (the anode dissolves).Cu → Cu2+ + 2e–
The ions from the solution become atoms.
Cu2+ + 2e– → Cu(s)
They stick onto the cathode. A layer of pure copper builds up on the cathode. As electrolysis takes place, the cathode gains mass as copper is deposited on it. As a result, the cathode gets smaller while the cathode gets bigger as electrolysis proceeds. Eventually the whole cathode dissolves.

Purification of copper by electrolysis
Only pure copper sticks to the cathode. Most impurities fall to the bottom of the electrolytic cell. They form a solid material (anode sludge or slime) which contains small quantities of precious metals such as silver, gold and platinum. The precious metals recovered from the slime are purified and sold.
An Experiment on Electroplating of Metallic Materials
Carry out an experiment on electroplating of metallic materials
Electroplating is the coating of a metal with a layer of another metal by means of electrolysis. Electrolysis can be used to coat a thin layer of a less reactive metal onto a more reactive metal. The thin layer of less reactive metal will provide protection from corrosion for the more reactive metal underneath. It may also make the product more attractive.
The object to be coated should be made the cathode and the coating material should be the electrolyte. The most commonly used metals for electroplating are copper, chromium, silver and tin.
Steel can be electroplated with chromium or tin. This prevents the steel from rusting and gives it a shiny, silver finish. This is also the idea behind chromium-plating articles such as car bumpers, kettles, bath taps, etc. Chromium does not corrode, it is a hard metal that resists scratching and wear, and can also be polished to give an attractive finish.
Nickel can be electroplated with silver. This will make nickel more attractive.The diagram below shows how a steel jug is electroplated with silver. The jug becomes the cathode of an electrolytic cell. The anode is made of silver. The electrolyte is a solution of a silver compound, for example silver nitrate. 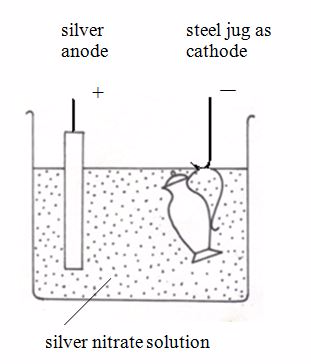 Silverplating a steel jug
At the anode: The silver dissolves, forming ions in solution:Ag → Ag+ + e–
At the cathode: The silver ions receive electrons, forming a coat of silver on the jug:Ag+ + e–→Ag (s)
When the layer of silver is thick enough, the jug is removed.In general, to electroplate any object with metal M, the set up is: