A family is smallest social unit. The family consists of father, mother, children and relatives. This kind of a family is called Extended family

Fill in the following table with the right information. The first one has been done for you.

Use of Real Family Pictures.

Show them your family picture, and use a family tree to express your family as a teacher. Students learn more when they find that things they are learning are available in their localities. It is a good idea if you allow them to come with their family pictures because each will have his or her own family to express. To show them how family relations are express, start with using your own family or just use your picture. 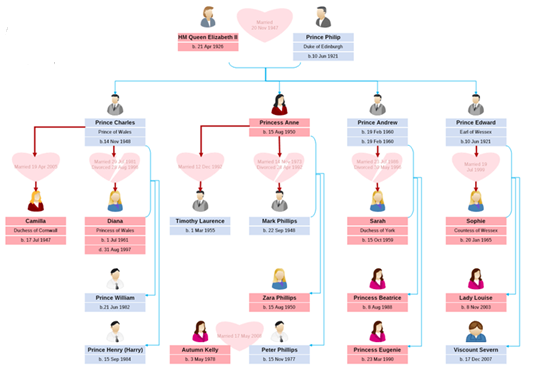 The table showing the various relationships of family members in English:

Guide the students to the explanation of these common vocabularies. Give some examples and let them explain the rest of the vocabularies.

As a teacher, use the following patterns when you are expressing your family members through words or in the picture:

Students Use Their Family Pictures.

Also a teacher may group students into manageable groups and allow them to select one student’s family picture they will use to express the family relations.

Simple Present tense is commonly used when expressing family relations. This may only be different when someone is talking about the past events of the family members. For example:

The ability to express one’s family relations is one of the cultural and life skills. The teacher can ask students to think about the places and situations where they can apply their family relationship.

Assessment 2: Ask students to choose the correct words in the brackets in the following sentences:

As it has been introduced in the Reflection, expressing family relations is important for anyone as long as he/she is a human being. These family relations bring unity, that’s, they show how people are mutually connected and related as one family. Apart from that, understanding family relations help people when they asked about their family members. This happens when thy fill out various forms and so on.

Possession refers to one having his/her property such as school, pen, houses, car, home, and farm

– My father owns a boat

– My sister own a big house

– We possess a big library

– That bus belongs to my father

Mr. Kibakaya is a light coloured skinned man in our street. He is baldheaded and his remaining hairs gray. Older people say that he has a fair complexion. His daughter is skinning, tall but tenders.

She is beautiful and attracts attention whenever she passes. Her twisting eyes confuse young man. She puts on her-heals on every weekend. Her young brother is shot and fat, he looks handsome and magnetic to girls his chest is wide as well as frightening nose

(i) He is a rude boy at our school

(ii) She is careless that her uniform is full of sports

(iii) A sincere student is liked by teacher

Character changes because of age education and people around, character reflects moral and cultural value. People from broken families usually show bad character. Character can also be understood through a language that a person uses.

We can also ask questions using the words in the box

(i) Who is shouting?

(ii) What are you doing?

(iii) Which boo is yours?