A MAN OF THE PEOPLE 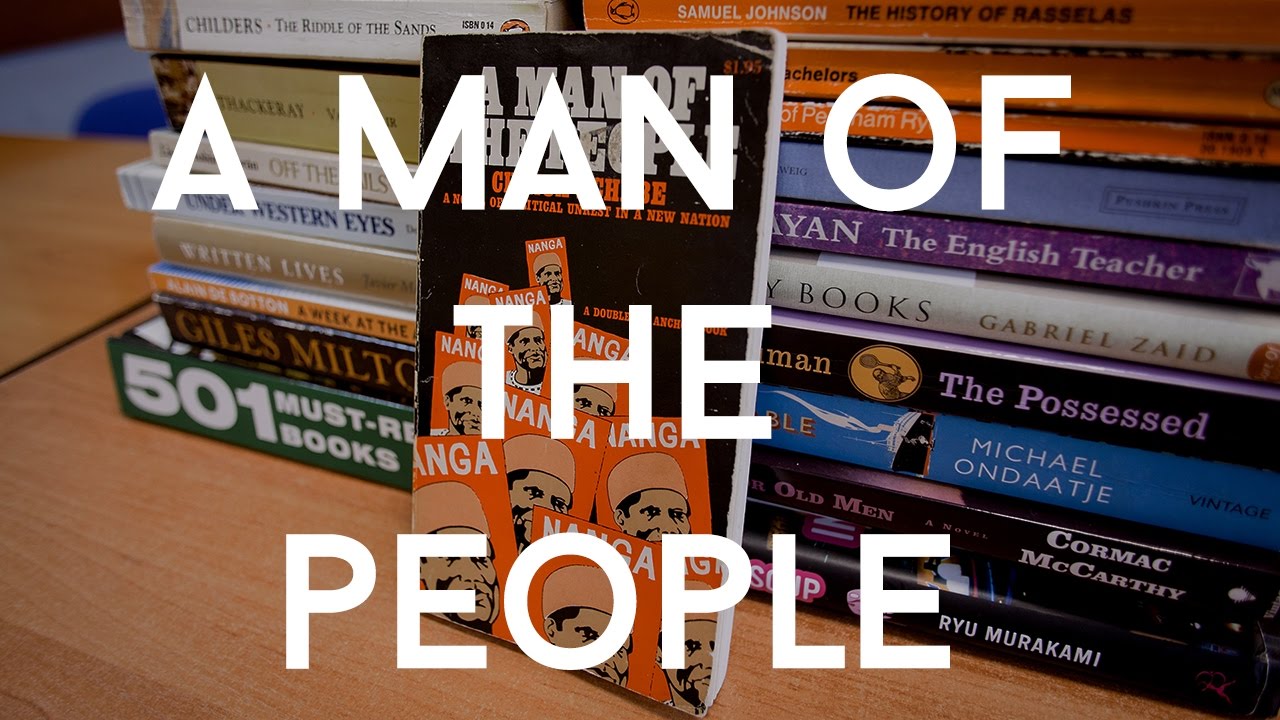 A MAN OF THE PEOPLE

SYNOPSIS OF THE NOVEL

A man of the people is a novel reflect most of African Countries after independence where by Most of the leaders show Moral decay to their citizens.

Through the central character (Chief Nanga) Leaders are reflected as corrupt people. As we see through the Novel Chief Nanga posses luxurious cars and owns Mansions. Chief Nanga as minister for culture he misuses the public funds for his benefits

This shows dishonest of some leaders and how they secure a position in the government.

Not only leaders but also the author wants to show how citizens are blinded by their leaders pretending that they are good to them while they are not. The narrator tells us that the Anata grammar school hall was full of the villagers waiting for the Honorouble Minister chief Mirah A. Nanga to address This is an obstacle to the few people like Odili who have come to realize that chief Nanga is not a good leader a he stands for the bad decision made by the PM believing that only by doing so he will secure his position in the government.

Also author shows us that in African countries privileged people continue to exploit unprivileged people. This is through Josiah who possess a shop and a bar exploit his customer by selling his commodities at a higher price. A gain he steal Anzages stock for the purpose of getting richer.

Here the author wants to make us aware that we need to fight against corruption as it is the obstacle of development to the society.

The title. The title A man of the peoples is a satarical/ironical title as Chinua Achebe wants to tell us that a man they consider as a man of the people is not because of some of the features we observe from him (Chief Nanga) e.g. Being womeniza helping Edina for the self interest, using public funds for personal benefits, being nepotist. Etc.

The setting: A man of the peoples an immaginary novel (fictional novel) as Chinua Achebe uses immaginary towns like Bori and villages like Urua and Anata. Though students do belive that the setting of novel is Nigeria, appart from the pidgin used in the novel we don’t have any other due that support us when making such a generalization. It is obvious that all other works of C. Achebe set in Nigeria but this is different in the novel “A man of the people” where he uses immaginary setting so as to be in a safe side regarding issues he rises in his novel as they direct tovel the government.

The plot: This refers to the arrangement of events in the novel Chinua Achebe uses chronological plot as he starts at the beginning to the end. The novel has thirteen chapters – in chapter one the narrator introducethe honorable Minister Chief Nanga and his visit to Anata Grammar school. In chapter two chief Nanga invite Odili to visit Born. In Chapter three Odili visit his home village urua before making a long journey to the capital. Odili describes Ezekiahs family and in this chapter we see Odilin Chief Nanga’s empire. Odili Explains that living with Chief Nanga makes him and know manythings which many people do not know. Odili is supprised because chief Nangas house as seven bathrooms each with WC.

Chapter five, Odili and Nanga are invited by Jean and John to a part on Saturday. We see Odili and Jean exchange ideas. Chapter six Odili explains the relationship between him and Elsie and the book Exhibition.

In chapter seven, Chief Nanga as a politician, the visit of the editor Julio, also the love affair between Nanga and Elsie, Odili become fusions with Elsie behaviour Odili leaves Chief Nangas home and go to his friend Maxwell. Chapter eight At Maxwell’s home Odili recalls the previous wents about betral of Elsie. Odili and Maxwell discuss about their new political party CPC(Common People Conversion).

In Chapter nine, is about the discussion of Josiah as an exploitation, we are also told about the blind begger (Azoge) defined as a thief in the name of trade. Odili meets Edna on their way to the hospital to see Edna’s mother they get a bicycle accident. Chapter ten Christians at Anata village Odili convices Edina not to be the second wife of Nanga. Odili tells many student who come have come back to anata spend christimas, they are found of western culture. Odili announces to contest against chief Nanga hence he is hated by everyday. Chapter eleven, Odili receives a letter from Edina, Odili enters the danger game of politics, Chief Nanga tries tto bribe Odili he offers Odili a scholarship so that Odili can leave the bad game of politics, Odili denid the offer .

Chapter thirteen, Odili attends the Nanga’s campaign meeting chief Nanga beats Odili and Odili is taken to the hospital. We are informed the death of Maxwell Edna visits Odili in the hospital, Eunice shoots chief Koko, the Army takes over the government. Edna marries Odili.

Though the plot is chnological this does not hinder C. Achebe to use flashback as we see in chapter one Odili takes us away back in 1948 where he tells us that chief Nanga was his teacher in standard 3 and how he become a minister in 1960 after supporting the firing of Dr Makete and other ministers.

Also we see the flashback in Pg. 28-29 Odili tells us how he was chased away by his friend’s father just because of the hatrage that Ezekiah samalu had to the people. It is in this pg. That we get to know who is Ezekiah samalu.

Style of the Novel.

This novel “A man of the people” is well developed in style as we read the novel we find that in narrating the story the authory uses all persons but 1st person singular is dominant. The author use Odili to narrate the story of Chief Nanga. In chapter one we see how Odili starts to narrate the story using the first person point of view “…………………………… I have to admit this ……………….. I was teaching at the time ………………… I took one look……………………. I couldn’t remember when I last ……….. Pg 1

“it is the time to spread the news abroad

That we are well prepared

For they and jolly good fellows

Likewise the author use stroy telling in chapter one Odili takes us way back in 1948 and tells us the story of Nanga. Also in the same chapter when he was chased away by his friend’s father. Also in Pg. 96 the gives the story of the group of dancers. Also in Pg 106

Generally the Language in “A man of the people” is understood but it is a bit difficulty to say whether the Lg is complex or simple, such kind of generalization can base on an individual reader.

The author use pidgin in some incidences intentionally so as to make cleara distinction between characters basing on education Chinua Achebe use pidgin to distinguish two classes in the society ie the schooled and unschool people where by educated people use the standard Language while the uneducated people. Use nonstandard Language (Pidgin). Eg. –“Why I go kill my master?………………….. I de eraze why I no go go jump for insider lagoon instead to kill my master?” “Pg said tge cook in pg 34. Another pidgin in Pg 14 and 15 after the ministers speech. Also in pg 31 by gate keeper.

He also use American diatect. Eg…………. But at the same time we have gotten somewhere” In British English we don’t have such past participle. This is in Pg 44 where Odili was making conversation with John the husband of Jean, these are the a parties who are advising their government on how to improve public image in America.

Chief Koko’s cook quivered as he was brought by the cowboy to answer to why he put poison to bis boss’s coffee. Pg. 34

These people are poor hence are exploited cheated easily

The title of the book

“A voice was heard in Ramah

Rachel weeping for her children

Chief Nanga tells Odili that he can bring him six girls and Odili will have sex with them fill he gets tired Pg. 72

“If you like I am bring you six girls this evening”

“Book exhibition? Asked Elsie How they de make that one again? My sister, make you de ask them for me- O Pg 61

Chief koko realizes that the coffee was not poisonous Chief Nanga starts tearing him.

Through the novel we see how leaders are corrupt and how they use their little to get what they want, a good example is chief Nanga who use his position to blind the mass so that they can not see his evils. Chief Nanga uses his money to sponsor Edna for the purpose of winning her he tries to bribe Odili so that he can not contenst against him, also Chief Nanga receives bribes from British companies. Also we see the same Chief Nanga bribes the journalist so that he can keep on writing things which are not true or an not be done.

Not only that, but also chief Koko bribes max as the way of weakening the CPC power. Boniface tells Odili that they have bribed the police officer and court clerk to cancel their case

“It is impossible to any society to proposer under corrupt leadership.”

People of Anata are ignorant as they have failed to realize how corruption affect them and the nation at large. Though they encounter problem in their daily life still they don’t take action against it. We are told that even if some one tries to educate them they are conservation

Ezekiah Samalu who is a local leader of P.O.P is not away of what is going on in the party

This is the state of being unable to get basic needs. A good example of this is Azoge the blind bigger who earn his living by begging. Edna’s family who are very poor chence Edna sacrifice his body to chief Nanga so that she can get education as her parents have failed to educate her. (to take her to school) Edna’s father want his daughter to be married by chief Nanga so that she could get wealthy

Also when Edna and Odili was on the way to the hospital they get an accident and the food was poured down, Edna cried claming that her mother to buy another food.

“Poverty is an obstack towards development

In the Novel Achebe shows different evils done by African leaders. Achebe’s intention is to rise awareness to the mass so that they can take action against evils in the novel we see the villagers refuse to buy goods from Josiah as they have realize that Josiah is exploiting them. Not only that but also we see Odili who has realize that chief Nanga is not a good leader as he is a corrupt leader he wants to rise awareness to other.

Not Odili perse also the formation of CPC is a sign of awareness as the main objective of CPC is to fight against corruption .

The situation of some one who is having authority to asist those he/she knows especially those they share tribe.

A good example of this is the expression we get from the novel that, “No matter what you know but who you know.

That means going against certain agreement

In the movel we see Chief Nanga betrays his wife after having relationship with other women.

The situation of being against something in the novel we see the villagers are against Osiah’s behaviour of exploiting them.

Odili is against his father’s behaviour of marring many wives hence many children. Who can not be able to take care of them.

Odili is protesting Chief Nanga’s bad behaviour hence he decides to go and live with his friend Maxwell.

“People should protest against bad things”