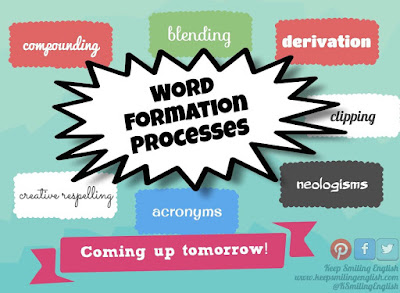 WORD FORMATION
In linguistics, word formation is the creation of a new word. Word formation is sometimes contrasted with semantic change, which is a change in a single word’s meaning. The boundary between word formation and semantic change can be difficult to define: a new use of an old word can be seen as a new word derived from an old one and identical to it in form.
Word Formation tries to explain the processes through which we can create new word forms. We’ve already seen some of these at work when we looked at morphemes and word classes, but now we’ll investigate them a little more closely, initially using exploratory methods again, rather than just looking at long lists of morphemes and listing their functions.

This process involves morphological processes (then formation of words through combinations of morphemes together with other different processes.
The process of word formation may involve the process whereby roots or stems received inflectional or derivational element (affixes) in order to form the new words.
NB: The roots, stems inflectional or derivational elements are all technique termed as morphemes

The morphemes are classified into several categories basing on several factor such as:-
Occurrence, meaning and function
There are two major types of morphemes
(i)   Free morpheme
This is the morpheme that can stand or occur alone (on its own) as a separate word in the structure of a sentences in any language.
The free morpheme includes all parts of speech i.e. Nouns, Verbs, adjectives, adverbs, pronouns, prepositions, conjunctions, interjections, articles

(ii)   Bound morpheme
This is the morpheme which can not normally stand alone as a separate word in the sentence structure as it is attached to another morpheme (lexical) free morpheme in the formation of the new word.
The Bound morpheme represents grammatical function such as word category tense aspect, person, number, participle, comparison etc.
Example ment, ism represents a noun, aly represent.
Adverb
Tense – ed, d, voice, number
Person – es
Aspect – ing – progressive aspect
Comparison – er, est
The Bound morpheme is farther divided in to two categories.
(a)   Derivation morpheme
This is the bound morpheme which is used to form or make new words with different meanings and grammatical categories or class from the stem i.e. It is the morpheme which when added to the stem it changes the meaning and / or the word class of grammatical category of stem/ base Example unhappy, illogical, impossible, empower
National – noun to adjective
Derivation morpheme may occur either before or after or both before and after the stem in the formation of the new words i.e. they may occur either as prefixes or affixes example management, mismanage, mismanagement.
The derivation morpheme may also change the sub classification of the same word class such as concrete noun into abstract noun e.g. Kingdom, friendship, leadership, membership
Deviation morphemes are also used as indicators of word category example simplicity, modernize dare indicators of verb by indicator of adverbs.
(b)  Inflectional morpheme
This is the type of bound morpheme which is not used to produce or form different words with different meaning but rather it is used to change grammatical form of the state i.e. Inflectional morpheme doesn’t change the meaning or word class but it only changes grammatical form of the sentence which represent grammatical function such as to mark the verb for tense aspect, participle voice etc
Example finished, Lorries, oxen
Past tense – finished
Past participle – proven
Number – Lorries, oxen, children
Inflectional morpheme also marks nouns and number.
They mark adverb and adjectives for comparison
E.g. smaller, smallest
The inflectional morpheme occur only after the stem (they are suffix)

FUNCTION OF MORPHEMES
The morphemes are analyzed as having three major functions that are directly linked with their types.
The following are the functions of morphemes:-
1. The morpheme (free morphemes) are used to form the bases or roots of the words i.e. a single free morpheme, lexical or functional forms the base or root of a word.
This function is therefore called Base – form function
E.g. Tree, after, along
2. The morphemes (derivation bound morphemes) are used to change the lexical meaning and / or the grammatical category of the stem.
This function is called derivation function
E.g. Disunity, illegal, beautiful, quickly, modernize
3. The morphemes (inflectional morphemes) are used to change the grammatical form or function of the stem without changing the meaning or word class.
This function is known as inflectional function
E.g. goes, tallest
TASK
Read the following passage and answer the following question
A thick vegetation cover,  such as tropical forests ,   acts as protection  against physical weathering and also helps to slow the  removal   of the  weathered layer  in deserts and  high mountains the absence of the vegetation   accelerates the rate of weathering plants and animals, however,   play a significant part in rock destruction, notably  by  chemical decomposition through the action of  organic acidic solution the acids develop  from water percolation through party decayed vegetation and animal matter.
Question
1. Identify
I. 7 lexical  morphemes
II. 5 derivation  morphemes
III. 2 inflectional morphemes

II.    Minor processes of word information
(e) CLIPPING
This process of word formation whereby one of the syllables are omitted or subtracted from a word and the remaining syllables are regarded as a new word
This occurs when a word of more than one syllable is reduced to a shorter form which is regarded as a new word.
NB: The removal or emotion of a syllable may take place either at the beginning at the end of the word or both.
(f) BLENDING
This is the process of word formation whereby two or more parts, fragments or elements of two or more different words are put or joined together to form a new.
I.e. it is the process of talking only the beginning part of one word and joining it to (with) the beginning or the end of another word.
Example:
breakfast + lunch = Bruch
Motorist + hotel =motel
Cellular + telephone = cell phone
Mobile + telephone = mobile
Television + Broad cast = telecast
International + police = Interpol
Transfer + resister = transistor
Information + entertainment = infotainment
Gasoline + alcohol = gas
International + network = internet
Television + marathon = telethon
Motor + pedal = moped
Electronic + mail = email
Smoke + fog = smog
Helicopter + airport = heliport
Parachute + troops = paratroops
Travel + catalogue = travelogue
Binary + Digit = bit
(g) ACRONYM
This is the process of word formation whereby the initial or first letters of different words are put together as a new word.
The words that are formed from the initial letter are technique termed as acronyms.
There are two types of acronyms
i.     Acronyms pronounced as a sequence of letter
E.g.      C.O.D – cash on delivery
CID – Criminal Investigation Department
FBI – Federal bureau
UN – United Nations
IPA – International Phonetic Alphabet
CUF – Civil United Front
CPU- central processing unit
ii.   Acronyms pronounced as words
E.g.     NATO – North Atlantic Treaty Organization
TANESCO – Tanzania electricity Supply Company
UNO – United Nations Organization
UNESCO – United nations Educational, Scientific and Cultural Organization
AIDS – Acquired immune Deficiency and Syndrome
CUF – Civil United Fronts
TANU – Tanganyika African National Union
TAMWA – Tanzania Media Women Association
(h) BACK FORMATION
This is the process of word formation whereby new words are created or formed by the removal of some parts (affixes) from an existing word.

(i)  BORROWING
This is the process of taking over the words from one language and adopting or incorporating into another language. The borrowed words are termed as loan words.

However other language have borrowed some words from English
(Shirt) English – shati – Swahili
Super market – suupaa – maketto – Japanese
Radio – rajio – Japanese
(j) COINING/ COINAGE
This is the process of word formation by which totally new words are incorporated into the language. This comes as a result of scientific discoveries in which new terms or words are introduced which name the product.

Revision Question
1.  Mention the word formation processes involved in the formation of the following words.

2. Make two different sentences for each of the following words.  For each sentence the word has to belong to a different class.