Double Entry
The Meaning of Double Entry
Explain the meaning of double entry
Businesses need to keep records of their transactions. The process of keeping record is called bookkeeping. The simplest form of bookkeeping is single entry. Every transaction is recorded once. This is unreliable because:
Now, a more reliable method of bookkeeping is double entry.
Different Types of Ledger
Explain different types of ledger
Businesses record their accounts in books called ledgers. A ledger is a main book that contains various accounts.
There are three main ledgers:
-The sales ledger: Is the ledger that records the accounts of debtors. The ledger is also known as the debtors’ ledger. A debtor is a person who owes money to the business, that is a person to whom the business sold goods on credit. So when the business has a new customer, it will open an account in the sales ledger for that customer.
-The purchases ledger: Is the ledger that records the accounts of creditors. This ledger is also known as the creditors’ ledger. A creditor is a person whom the business owes money, that is a person from whom the business bought goods on credit. When the business has a new supplier, it will open an account in the purchases ledger for that supplier.
-The general ledger: Is a ledger that records all accounts other than debtors’ and creditors’ accountants. Examples of accounts recorded all accounts other than debtors’ and creditors’ accounts are fixed assets and expense.
-Double entry: Is a bookkeeping system whereby every transaction is recorded twice in the ledger. It is recorded on the left as debit (DR), and on the right as credit (CR). Every transaction involves the giving and receiving of a benefit.
A Ledger
Construct a ledger
Suppose that a company takes 50,000/- from the bank to pay wages.
Suppose the company buys assets worth 100,000/- from ABC Limited.
When transactions are written in a ledger, they are said to be posted to the ledger.
Posting Entries in the Ledger
Post entries in the ledger
Example 1
The transactions shown in the table below belong to XYZ Traders; Post them to the relevant ledgers. 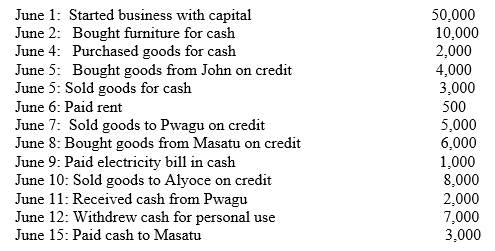 Note: Check that for each transaction there are two equal entries, one for debit and one for credit, for instance:
June 11: Received cash from Pwagu, 2,000
-Pwagu’s account is credited 2,000
-The cash account is debited 2,000
This is what is meant by double entry.
Closing the Simple Accounts
Close the simple accounts
Closing the accounts is the process of balancing the accounts. This involves determining the totals of the debits and credits, and finding the difference between the two sides. The difference is the balancing figure, which is placed in the side that is less. This makes the two sides equal.
Example 2
Consider the following account from Example 1. Close this account.
Cash account

The balance c/d shows the amount that stands on the account on the closing date. It appears as balance b/d (b/d means brought down) on the opening date of the next trading period, on the other side of the ledger.
Exercise 1
1. What is a ledger? Give an explanation of three ledgers you know, with an example of accounts kept in each ledger.
2. For each of the following transactions, name the ledger it would be posted to, and whether this would be as credit or debit. 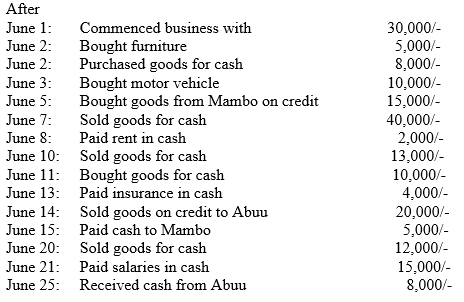 Accounts with debit balances are posted in the DR column and those with credit balances in the CR column.
Functions of trial balance
The trial balance serves the following two major roles:
-It checks the arithmetical accuracy of the ledger. The double entry system requires posting equal amounts to debits and credits. Therefore the trial balance is expected to balance if the arithmetic was correct. If there is a difference in the totals of the debit and credit columns of the trial balance, then some errors were made.
-It simplifies the preparation of the final accounts. The trial balance contains all the accounts extracted from the ledgers. This makes it easy to post the accounts to the final accounts.
Construction of Trial Balance
Construct trial balance
Look again at Example 1 of XYZ Traders. The accounts, after being closed, appear as follows: 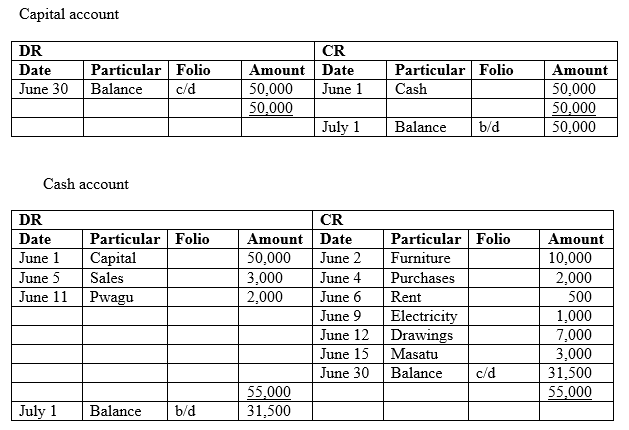 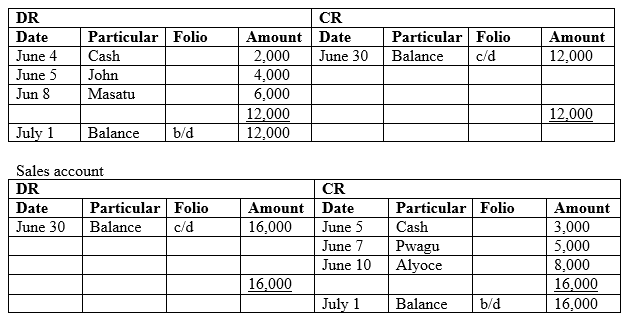 And other accounts closing.
NB. The balance b/d determines whether the account has a debit or credit balance.
Example 3
Construct the trial balance for XYZ Traders of Example 1.

Exercise 2
1. Why is trial balance referred to as statement of arithmetical accuracy?
2. Trial balance is statement and not part of double entry. explain why?
3. The following balances were extracted from the ledgers of Doka traders on 30 June 2005. 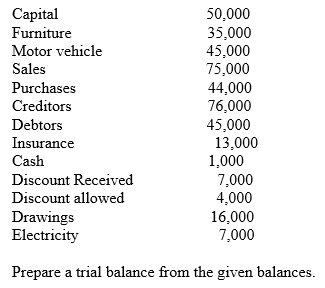 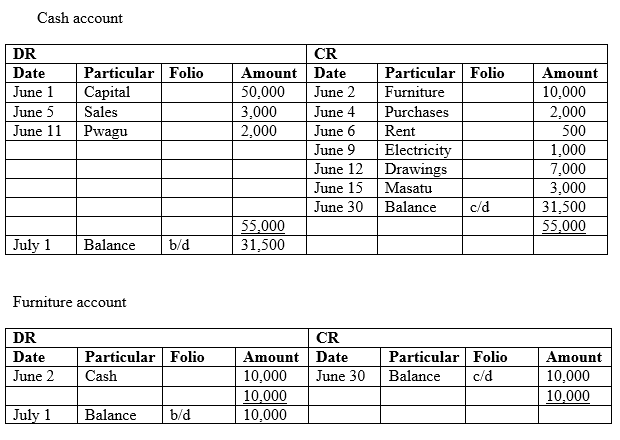 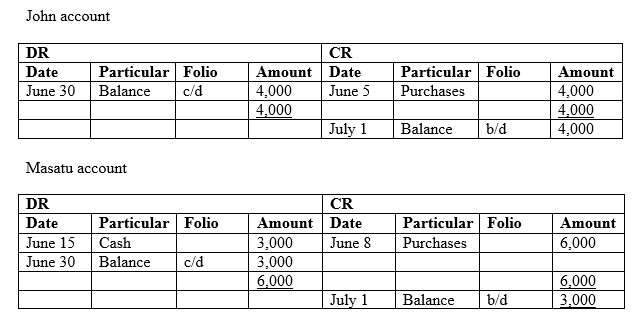 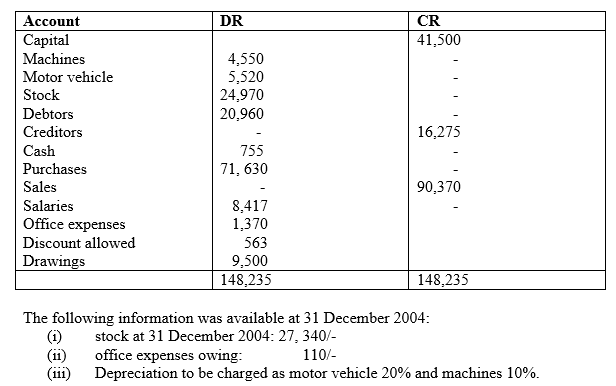 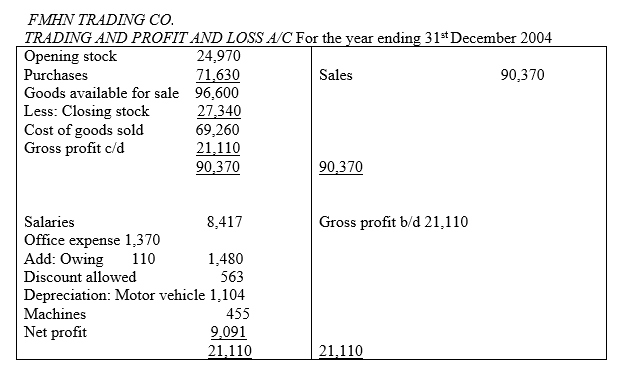 Net Profit/Loss Account
Ascertain net profit/loss account
When net loss is recorded, the profit and loss A/C appears as shown in the following example.
PROFIT AND LOSS A/C
For the year ending …………………… 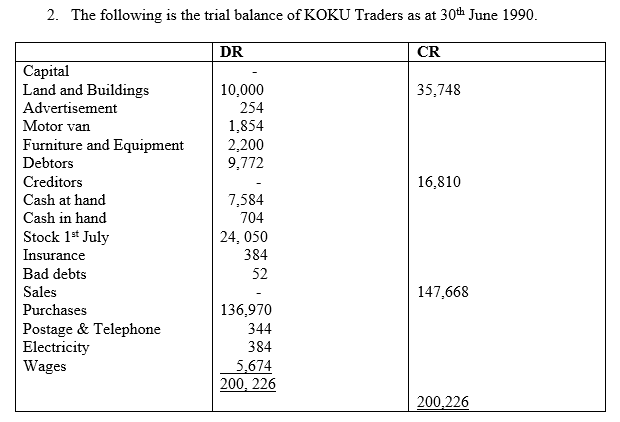 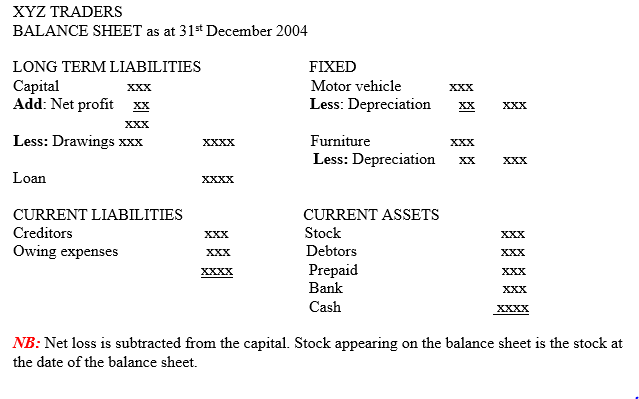 Posting Entries in Balance Sheets
Post entries in balance sheets
Example 5
Considering FMHN Trading Co. from above example, the balance sheet will be as 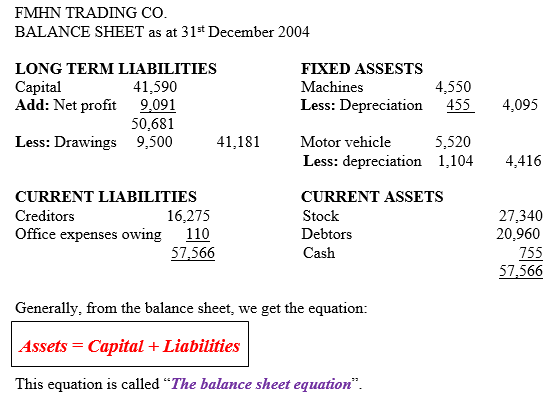 The quick ratio measures the ability of the business to pay current liabilities out of current assets excluding stock which is considered less liquid.
From the balance sheet of FMHN Trading Co. we can find the following. 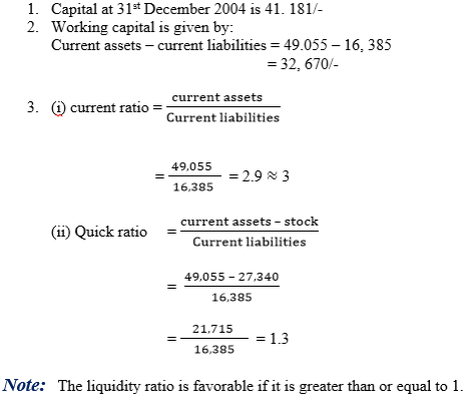 Exercise 4
1. Prepare the balance sheet for the balances given in the table below. 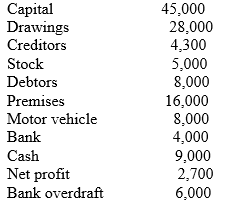 2. From the balance sheet constructed in question 2, determine the following.
Summary

Exercise 5
1. Explainan advantage of double entry bookkeeping over single entry bookkeeping.
2. Givethree accounts that would be kept in the general ledger.
3. Define the quick liquidity ratio.
4. Xis acustomer of company PQR. Below are the transaction made by X over a month.

5. The following table shows the closing balances of company PQR of question 4.

7. Complete the balance sheet below for Nyati Ltd. of question 6.

8. Use the balance sheet constructed in question 7 to find the following.