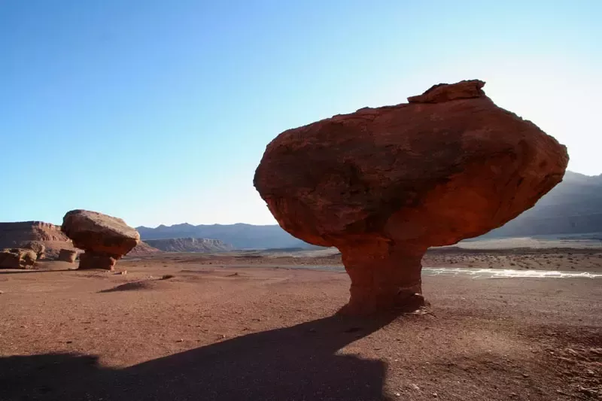 This is more affected in the arid region especially desert than in humidity areas. Even in desert is found that wind action is more effective in hot desert than in cold desert. This is because of the following reasons (wind is in air motion)

1. A lot of loose and unconsolidated dry masses of sand and gravel that can be easily acted upon by wind. Mechanical weathering can take place hence exfoliation

2.  There is absence of vegetation cover in most areas

3. There are very strong tropical storms within the desert

In hot desert because the air molecules expand so wind increase.

Depression is the area where pressure is low.

Known as erg in the Sahara desert the surface of this desert is covered by mostly in large quantity of sand that are product of wind deposition.

Known as reg in Algeria and Serir in Libya and Egypt.

The stone desert surface is covered by angular boulders, gravel and pebbles.

Known as Hamada in the Sahara desert. Its surface is made up of barely rocks.

Scarcity in vegetation results in exposure of the desert surface to the agent of some process like;

It is the mechanical/frictional erosion that is caused by the materials such as course particles that are carried down by wind.

It is done by hitting, grinding, scraping and polishing of the rock surface.

Is the blowing away of any unconsolidated materials like dust and fine particles. This is influenced by

the nature of desert landscape, velocity and energy of the ocean currents.

Is wearing down of the wind borne materials as they collide against each other. They also rub or hit

against rock forces in their path.

This refers to the moving of material from one place to another by blowing wind.The movement of

particles is determined by several factor like: Strongness of wind-usually over 20km/hr,turbulent from

a constant direction,blow steadily for a length period of time.Wind transportation involve three

Traction:This involves dragging or rolling of large pieces of materials such as pebble

Saltation:Is process in which smaller pieces are carried while bouncing on the ground or on the surface.

Suspension: The process whereby very fine and light particles like silt  or dust are transported while

It is made up of heterogeneous rocks of different resistances.

These are ridges consisted of layer of hard and soft rocks overlying vertically downwards.

They are formed in areas where the rock layer i.e. horizontally and are characterized by joints.

Weathering opens the joints and wind abrasion then continues the work of weathering leading to the formation of furrows and zeugen.

Are the ridges consisted of hard and resistant rock standing either vertically at an angle and vary in height from 15m but having length up to 100m.

They are elongated rock ridges of vertically or nearly vertical layer of resistant rock separated by soft layers.

They run parallel to the direction of prevailing wind of abrasion.

The softer rock layers are easily worn out than the hard rock layers to form furrows and ridges. Example: Atacama Desert – South America.

These are hallows produced by wind deflation. Shallow depressions in outcrop of the weak rocks. They are deepening by wind deflation and some originated in faulted rocks. When those hollows are filled with water they are called oases or swamp.
Example:Kalahari,Near Tsane in Botswana,NW at Upington in South Africa etc.

They are residual hills consisted of land and resistant rock left standing on the surface often the rest part of the earth has been eroded.

When inselbergs are smooth they are called boarnads.

They are characterized by a lot of joints.

These are the horizontal areas of bare, polished rock formed by the scoring action of grains of quarts. – Flatter in shape (escarpment)

These are heavier rock blocks pebbles left behind after wind has sorted and carried away all materials.

FEATURES DUE TO WIND (AEOLIAN) DEPOSITION.

The materials transported by the wind form different feature after deposition.

–     Features formed are like dunes (bar khans and seifs), loess and ripples.

Hills of sand deposited by wind in the desert. Influenced by the extent of vegetation cover, the size of sand particles, amount of the materials and the velocity of the cover

(Seif dunes) they are sometimes called longitudinal dunes. They are long narrow ridges of sand which lie parallel to the direction of the wind. They occur in the small scale in sand areas

Is an accumulation of sand that has been carried and deposited beyond the desert limits. Loess leads to the formation of fertile soil. Example can be found in China.

They are the smallest wave structure, sometimes less than centimeter high. They are commonly found between dunes.