The Meaning of Evolution of Man

Explain the meaning of evolution of man

One of the earliest defining human traits, bipedalism — the ability to walk on two legs — evolved over 4 million years ago. Other important human characteristics — such as a large and complex brain, the ability to make and use tools, and the capacity for language — developed more recently. Many advanced traits — including complex symbolic expression, art, and elaborate cultural diversity — emerged mainly during the past 100,000 years.

The Theory of Evolution of Man

The story of human evolution began in Africa about six million years ago and it describes the very long process that our ancestors went through to ultimately become modern humans. This process has been uncovered by studying fossils and understanding the underlying theory of evolution, and while new fossils are uncovered every decade revealing new chapters, scientists agree about the basic story.

Evolution means the changes that occur in a population over time. In this definition, a “population” means a group of the samespeciesthat share a specific location and habitat. Evolutionary changes always occur on the genetic level. In other words, evolution is a process that results in changes that are passed on or inherited from generation to generation. It does not, for example, describe how people can change their muscle mass by lifting weights.

When successful, these genetic changes or adaptations, which happen when genes mutate and/or combine in different ways during reproduction, help organisms survive, reproduce, and raise offspring. Some individuals inherit characteristics that make them more successful at surviving and having babies. These advantageous characteristics tend to appear more frequently in the population (because those individuals with less advantageous characteristics are more likely to die without reproducing), and over time these changes become common throughout that population, ultimately leading to new species.

The Types of Tools Used during the Old Stone Age

Describe the types of tools used during the old stone age

This lasted from 1.5 millions years up to 750,000 years ago. At this time man was involved in hunting and gathering that is their livelihood depended on collection of fruits, roots, vegetables and meat. The tools made at this time involved chopping tools, pebbles, and hand axes.

Some remains of these tools were found in East Africa in Olduvai Gorge, Tanzania, Ologa and Nsongezi Rock shelter in Uganda

The Physical Changes of Man during the Old Stone Age

Describe the physical changes of man during the old stone age

During the Old Stone Age, man had the ability to walk with two limbs though he could not stand upright. Additionally, he also had a hairy body, brain capacity of 650-775cc and a skull similar to that of the modern man but much larger. Generally, man was practical and skillful.

How Man Obtained Food during the Old Stone Age

Explain how man obtained food during the old stone age

At this time man was involved in hunting and gathering that is their livelihood depended on collection of fruits, roots, vegetables and meat

During that time tools made were sharper compared to the Early or Old Stone Age.

During the middle stone age, man used smaller and sharper tools than those used during the Old Stone Age. Such tools included spears and knives used for different activities like defense and security as well as in food preparation. During this age, fire was discovered and as a result man started to eat roasted food.

The Physical Changes of Man during the Middle Stone Age

Describe the physical changes of man during the middle stone age

Man experienced physical changes during all the ages. During the middle stone age, man had an upright posture and brain capacity between 775cc and 1225cc. During this age, man was characterized by thick jaws, increased intelligence and skills, as compared to the Old Stone Age.

How Man Obtained Food during the Middle Stone Age

Explain how man obtained food during the middle stone age 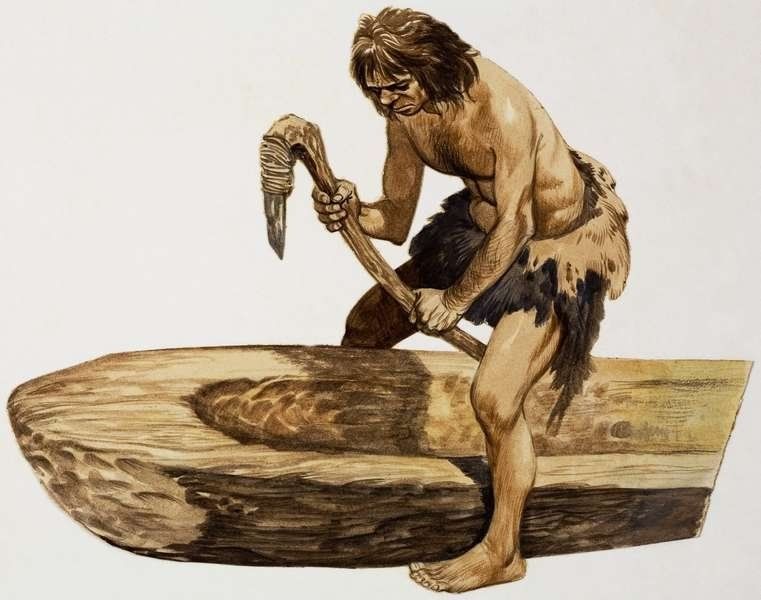 The Advantages of the Invention and Uses of Fire

Explain the advantages of the invention and uses of fire

During the Mesolithic revolution, the most important discovery made was the discovery of fire. This discovery had a lot of advantages to man. Man used fire to roast food, clear vegetation, keep himself warm,Chasing wild animals (to defend himself).

It started from around 50,000 BC up to the first Millennium, while at this stage man used much sharper tools than in Early or Middle Stone Ages.

At this time man started farming and animal keeping. Due to that it was the time when man started to have settlements.

Another development at this time was painting and drawings for example in Caves, evidence of this can be seen in Amboni caves (Tanga), Kondoa (Dodoma) and Irangi (Singida)

The Physical Changes of Man during the Late Stone Age

Describe the physical changes of man during the late stone age

During the late Stone Age, human beings were a direct ancestor of modern man. They had the ability to think as their brain capacity ranged between 1300cc and 1500cc. Also, they had an ability to make and use more advanced tools compared to those made and used by their ancestors. It was in this era that man was more intelligent than their ancestors had slightly thick jaws.

At this time surplus food was available, this facilitated the increase of the human population and the emergence of village settlements.

This was the time when man started to make and use iron tools. Iron age in Africa started more on the first millennium in a few societies e.g. in East Africa, while other societies like western Sudan States (Ghana, Mali, Soghai), Axum, Egypt, Nubi, and Meroe for North Africa

How Iron was Discovered

Explain how iron was discovered

Iron was discovered through particular stones which become hot and cool and finally change to a hard matter known as iron. In East Africa, the iron age is believed to have begun around 1000AD. Famous early iron sites were discovered in Engaruka within the rift valley in Northern Tanzania. Other sites include Uvinza, Karagwe, Ugweno, Iteso and western shores of lake Victoria.

The Advantages of using Iron Tools

HISTORY FORM 1 TOPIC 3: DEVELOPMENT OF ECONOMIC ACTIVITIES AND THEIR IMPACT

FROM ONE MATHEMATICS NOTES ALGEBRA

CIVICS NOTES FOR FORM ONE ALL TOPICS