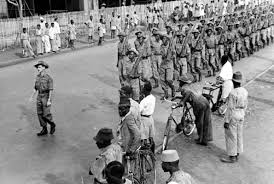 THE SCRAMBLE FOR AND PARTITION OF AFRICA
The scramble for and partition of Africa took place in the second half of the 19th century. The term “scramble” meant a great struggle for colonies on the African continent amongst the European powers. The term “partition” means the dividing up of the African continent amongst the scrambling European powers.
The scramble for and partition of Africa was the outcome of the activities of the missionaries, explorers, traders and the chartered companies in Africa.
REASONS BEHIND THE SCRAMBLE FOR AND PARTITION OF AFRICA.
1. Imperialism
Development of capitalism in Europe from industries to monopoly stage in 1870’s this created the demand of;
Demands for markets
Need for  raw materials
Area to invest their capital
Cheap labour
Area to dump unemployed white men
2. National prestige
The possession of colonies was considered as a symbol of greatness and respect. For example Germany and Italy struggled for colonies with the aim of acquiring national prestige.
3. Balance of power
The balance of power was disrupted by Franco- Prussian war of 1870-1871 [was between France and Germany]. Germany rose to power after defeating France and seizing her provinces like Alsace for production of coal and Lorraine for iron. There after France began to scramble for colonies in order to regain its power and compensate for the lost provinces.
4. The growth of European nationalism
This was union of various small European states which were ruled by princes into bigger empires. In Germany the unification was made under Otto Von BismarkK . This unification made their countries to praise their culture and declared a mission to civilize other cultures hence Germany and Italy rushed to scramble for colonies in Africa.
5. Strategic reason
Strategic importance of some areas in the African continent, such as :-
Egypt
Was scrambled for by British and France because of the use of the Suez Canal as a short cut and getaway to the British colony of India and the Indian Ocean where France monopolized sugar production.
South Africa
Because the British and the Dutch exploit Gold and Diamonds.
The Congo basin
Scramble for by Belgium, France and also Portugal because of minerals like Gold and Copper.
Navigable Rivers, Fertile soil for production of rubber and High population for creation of market labor
Niger Valley
European powers, French, British and German scrambled for because of navigation, agriculture and high population.
6, To spread Legitimate trade
The European claimed that they wanted to spread legitimate trade that deals with raw materials, and other natural goods.
Humanitarian reason
Has been given by European nation’s historians that, they scrambled for the African continent in order to civilize African societies.
6. Balance of power; before 1870 there were stable powers for these European nations especially France and Britain but the balance of power destructed or disturbed by the Franco-Purssian war of 1870-71 when Germany defeated France and took Alsaceand Lorraine. So through that Germany became stronger instead of France which immediately began to scramble for colonies in order to regain its power compensate for the lost provinces.
7. Berlin conference; this conference stimulated the scramble for because each power exerted a colony proportionally.