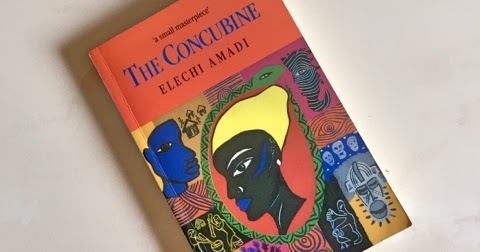 Like other novels, the concubine has many aspects of form that helps to present the themes intended by the artist, the following are some of these aspects of form

THE TITLE OF THE NOVEL

The title of this novel THE CONCUBINE is neither ironical or symbolic there is straight ,it is all about the beautiful , Hard working and courageous women ( Ihuoma ) whom despite her good ways of hiring Ihouma should not be married but she could be someone concubine.

According to the medicine man Anyika, behind this women there is a powerful and dreadful spirit who is the sea king ,such spirit is jealous and kills every human being who dares to marry Ihouma.

The novel is set in Nigeria in rural area during pre- colonial era.

The author Elechi Amadi has arranged the story into thirty chapter but the flashback style. There is a flashback style for in the beginning of the novel is seen the incident of fighting between Madume and Ihouma ,such incident is fall owed by the death of Emenike, later on the author reveals the origin of Madume and Emanike conflict as well as the secret behind Ememike death.

THE DICTION (LANGUAGE USE)

The language used is generally simple ,clear, straight forward and it has got some language artistic element such as figure of speech and other language techniques, the figure of speech include simile ,metaphor, personification symbolism and saying etc

This is a figure of speech in which two basically dissimilar thing are compared by using conjunction such as like, as, as……………….as etc (indirection comparison).

·         The fresh red earth contrasted strongly with the surrounding, like a big red boil on a black skin (pg19).

This is a figure of speech which compares two basically dissimilar things without the use of conjunction.

This is a figure of speech where by the human feature characteristic or behavior are attributed to non human being things or object.

·         Snake:This has been used to symbolism evil spirit behind Ihuoma, The action of this snake swallowing.

·         An arrow :This symbolism the fight or defeat from the evil spirit ,the action of Nwomas arrow missing and hitting the upper part of Emenikes be basically pg(215) symbolism how the evil spirit is undefeated.

THE CHARACTERS AND CHARACTERIZATION

In this novel we have the following character as follows;

·         She is beautiful ,hardworking and courage women in Omokachi village

·         She lives in good way of having ,she also used to settle quarrels among the women in her village and she offered advice to older women

·         She is Eminikes wife and mother of Nwonna and Azuhunike ,she suffered her husband s death

·         She protested against the exploitation which was done by the fishermen to the traders.

·         He fell in love to Ihouma ,but when she rejected him he married Ahurole, when his marriage with Ahurole broke he came back Ihuoma and wanted to marry her again.

·         He used to question about exploitation done by fisher man.

·         He is Ihuomas husband and father of Nwonna and Azubuike

·         His death is attributed to the spirit behind Ihouma

·         He is hardworking, courageous and supportive character; he supports Ihuomas in every aspect of life.

·         He once disagreed Ekwuemes marriage proprosal towards Ihouma and he force him to marry Ahurole. Later on he supported the marriage idea between his son and Ihouma

·         Like her husband she once disagreed Ekwuenes marriage proposal to marry Ahurole, but later on he supported the marriage idea between her son and Ihouma

·         She loves her neighbour Ihouma and she support her

·         She is dull who kept on crying much even for small misunderstanding with her husband ,she believed to have evil spirit in her head

·         Due to her frequent quarrel with her husband, she convinced with her mother to make love position for Ekwueme

·         He is the chief rain maker and the leader of Omakochi village , he iis also the priest of God of thunder and sky

The concubine contains a variety of themes; the following is a discussion of some of these themes

Based on tradition beliefs and other Africa tradition such as traditional dances, food, medicine, time telling, dressing etc,

Traditional beliefs ,belief in which craft example the people of omokachi believed that the divine priest can tell all problems through divination, eg the medicine men Anyika used to divine when different matters were brought to him, for example he divine on the marriage idea between Ihuoma and Ekweume, they also believed that such divination must be paid otherwise they would not be right

Furthermore they believed that when one behaves unusually he must have been bewitched that is when Ekwueme started to behave strangely his parent believed that he was bewitched.

Another traditional belief is that the people in this society believe that there are some people who have got spirit power and that they can communicate with the gods ,e.g. Nwokey is believed that he is spiritual power full enough to control rain in the society

THE QUESTION OF MARRIAGE

In the question of marriage Elechi Amadi has reflected it in different ways. Some of the marriages are stable while others are unstable, for example Wigwe and Adakus marriage is stable also Ogbuji and Okachis and others. On the contrary some are unstable for example Ekwueme and Ahuroles marriage but due to the fact that Ekwueme was forced to marry Ahurole (forced marriage).

It is also clear that in the society given there are polygamy marriage , That that is why once Ihouma told ekwueme that if he does not marry the second wife people will think she is selfish

The fisher used to exploit used to exploit trade who were selling their farm produce at the village market , such Riknos used to buy such products so cheap that the traders got no profit, Ihouma was protesting that to Ekwueme that she had sold twenty prize yams.

Some people in the society seem to be disunity and that is why they suffer with the problem for exploitation, Ihouma suggest that all the traders must unite and make rules which will help them to overcame the problem of exploitation which is done to them by fisherman but ekewueme said that no rules will work because most of the traders are greedy, this shows that they are disunited.

THE ROLE AND POSITION OF WOMEN

The author has portrayed women in different and various aspects as follow:

·         Women as supportive. Women have also been portrayed as supportive i.e. They support others in different and various social activities e,g Ihouma supported Wigwe and Adaku call down Ekwueme until he was proved fine, also Nnenda used to support her neighbour Ihouma.

·         Women as brave, some of the women were brave e.g. aleruchi oji was a brave woman who ever dared to wrestle down her husband.

·         Women as care taker to the family, Ihuoma is a good example she used to care her children even after the death of her husband Emenike, she also once rejected to marry husband compound and to take care of his children left behind inheritance women have always prepared discussion meal for their husband and they had watch on them.

·         Women as weak creature and stupid, women have as portrayed as weak and creature who can’t stand alone and take care of their families, Ogbuji told Nwonna that she would behave like a women that is when he was talking while eating, also Ogbuji regard all women to be fools.

·         Women as advisors, some women have been portrayed to have an ability to advise other even men and can be listen, Adaku advised her husband on different matters, she is the one who advised Wigwe to go to Anyika and see what was behind Ekwueme problem, also Ihouma used to advise other women.

·         Women as quarrels settlers, Ihouma has had ability to settling quarrels among women in the society.

·         Women as witch craft holders, Ahourole and her mother went to Anyika to seek for love potion which would make Ekwueme fall in love to Ahurole heavily.

An author has also reflected love affair put in different ways.some had immoral love affairs while some had formal for example Ihouma and Ekwueme was formal love because they want their love to been official in marriage stage.

In the society some character protected against different and various issues;

·         Ihuoma protested against exploitation which was done by fisherman to them, because fisherman used to buy their products cheaper

·         Ihuoma also protest against the marriage proposal brought to her by Ekwueme but later on she agreed to marry Ekwueme .

·         Ekwueme protest against Anyikas divination that they should not marry Ihuoma for that she is unusual. He also protest against the marriage between him and Ahurole

·         Ekwueme was disappointed when once Ihuoma rejected her in front of his father wigwe ,he was also disappoint when he was to marry Ahurole against his wishes.

Madume inherited Ekwueme plot of land something which led into big conflict between them.

·         Emenike vs Madume:They had a conflict over land which led them into fight and Madume attracted his open violent later on emeike died of lock chest

·         Madume vs Ihuoma:Ihuoma was harvesting plantain in her husband land but Madume told to care the plantain alone and that is not her land ,Madume also had conflict with Ihouma because she wanted to marry Ihouma but she refused

·         Madume vs village elders:Madume had conflict with village elder i.e. Chima and Webilo who went to settle quarrel between him and his wife but Madume quarreled with them also.

·         Ihouma vs Ekwueme:Ihuoma and Ekwueme had conflict once that is because he wanted Ihuoma for marriage but Ihuoma refused

·         Ekwueme vs Villager especially nwokekoro:Ekwueme was found in the free and was told to descend but he refused till Ihouma was brought.